Hanukkah is a new holiday for me. I started celebrating it in 1998, the year I met Mr. D, and it became a permanent part of my calendar in 2003, the year we got married. What I love most about Hanukkah is that it is truly a family holiday. Mr. D's sister always hosts the annual Hanukkah dinner, and all of the local nieces and nephews attend, along with, in recent years, boyfriends and girlfriends, and this year, for the first time, a fiancee (nephew Mike got engaged in October). We get together to eat potato latkes and matzo ball soup, sing songs, play dreydl, exchange presents, and enjoy each other's company.

I've put together a collection of scenes from several Hanukkahs to give you a taste of this wonderful, bright winter holiday.

Autumn Adventures: A Convention of Crows and Fish Tails

Last Friday, Mr. D and I decided to do our last Autumn Adventure of the year at Carkeek Park, in the Broadview neighborhood of Seattle. The park is known for its rocky beach and spectacular views of the Olympic Mountains, and for Piper's Creek, which runs through the park and empties out into Puget Sound. It was a gray, cool day, with no Olympic views, but we still found much to look at and listen to.

We started out by walking on the beach, where we observed some typical Puget Sound waterfowl.

There were some other birds hanging around, too, causing quite a ruckus. I recorded some video, which you can see below. In addition to the bird activity you can see Mr. D, exercising his arms and shoulders, and, if you look closely, you can see a sea lion out in the Sound, just after Mr. D leaves the frame.


The crows were, as you can tell, very loud, but also fascinating. I snapped this photo of some of the them in action:

After listening to and watching all of the crow activity, we headed for the trail that follows Piper's Creek.  The silence was welcome after the commotion down on the beach. It was not completely silent, however. One of the reasons that we wanted to walk in Carkeek Park at this time of year is that a salmon run has been restored in Piper's Creek, and chum salmon spawn in late November and  December. As we walked along the creek, we at first thought that we might be too late to see any spawning salmon. We did see a few dead salmon (salmon die after they spawn), and were about to give up looking for live ones when we stopped at a viewing area along the creek. Here is what we saw and heard:


Isn't that amazing? It certainly showed me that nature's wonders happen even in the cold months of the year.

Do you do gift knitting for your friends and family at the holidays? I've done some in previous years: socks for my cousin Annie in 2009 and for my friend Elizabeth in 2010. Last year, I also knitted my biggest gift project ever, a vest for Mr. D. This year I decided to knit socks for my sister-in-law, her partner and my nephew, six year-old Olin.

You've already seen the finished Karen's Crow's Feet, and the in-progress Hearts for Evi Socks when I wrote about them in October. Since then, I finished Evi's socks and started and finished Olin's, which I'm calling the Stripes for Olin Socks. All three pairs have been blocked, and I think they look fantastic! And best of all: my holiday knitting is done—as of December 6—the earliest ever!

I have also finished knitting another sort of sock project about a week ago: a Christmas stocking. Mr. D is Jewish, and so he doesn't have a special handmade Christmas stocking, like the one Aunt Helen knitted for me when I was little. He has been using one of my collection of store-bought and craft fair stockings when we do our annual stocking tradition (more on that in a later post). My knitting group decided to knit Christmas stockings as a group project, so here was my opportunity to knit Mr. D his own stocking! My knitting guru, Christy, converted Maurya McBride's Snowflake Stocking to a stranded pattern in the round, and as a result, I got to practice two-color, two-handed knitting. The result isn't perfect, but I'm really proud of finishing it—it's only my second completed colorwork project.  Here is the final result: 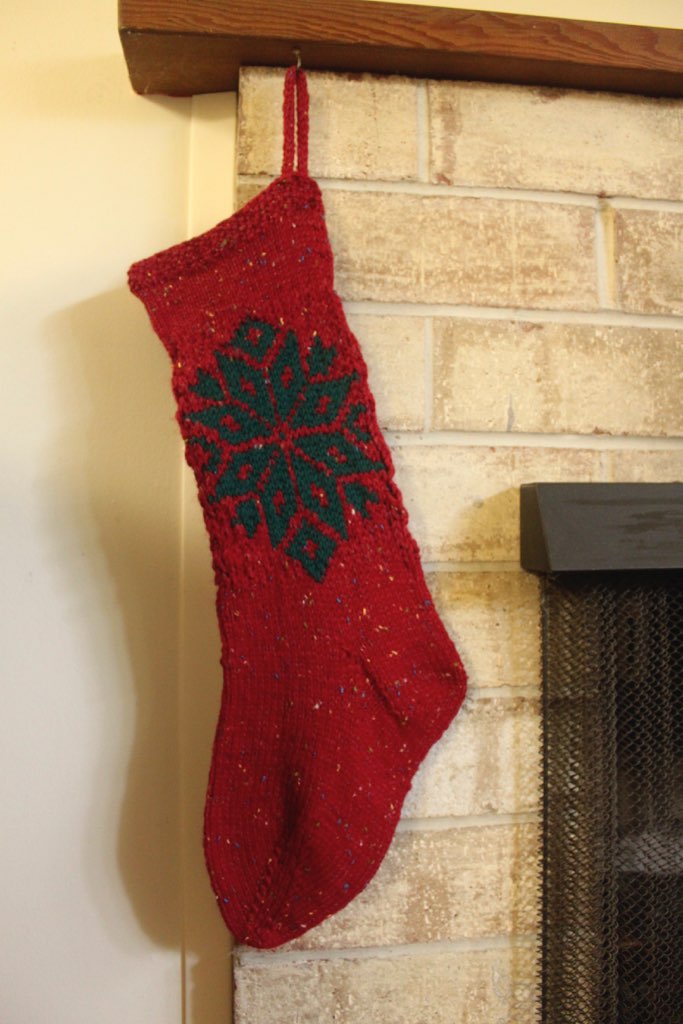 So, gift knitting is done, but the holidays are just beginning. I'll keep you updated about my holidays—both Christmas and Hanukkah—in the weeks to come.
Posted by Julie at 1:43 PM 3 comments:

Back in the late 1980s and early 90s, a whole other lifetime ago, I lived in Upstate New York, near Albany. There were several occasions when I had to go down to "The City" for my job, and I hated these trips with a passion. I found New York City scary (it was, then), big, dirty, and an altogether unpleasant place to be. Fast forward twenty years—now I look forward to the day after Thanksgiving almost every year, because Mr. D and I spend the it in New York City. We get up before any of the other in-laws and cousins, and catch the nine o'clock express New Jersey Transit train to New York, so we can arrive at Penn Station before ten. In most years we have tickets for a two o'clock matinee performance of a musical. This year we chose Stomp, playing off-Broadway, so that we would see something that the six year-old nephew would enjoy (he did), and we were given the gift of an extra hour, as the matinee didn't start until three.

We have a standard routine: first, walk over to Fifth Avenue and wander up to Rockefeller Center. We stop to watch the skaters on the ice rink and browse the branch of the Metropolitan Museum store located there. We travel further up Fifth Avenue, passing by the beautiful St. Patrick's Cathedral.

In most years, we head to a museum. This year, our favorite, the Cooper Hewitt National Design Museum, was closed for renovations, so instead, we headed to Tender Buttons, a place I've wanted to visit ever since I first read about it at least ten years ago.

Tender Buttons is, as you might have guessed, a button store. But it is also a small button museum, with antique buttons in glass display cases, just as you might see them in a museum. It's a totally fascinating place, and I could have spent a lot more time there than the half-hour or so that we did.

Next, we walked through Central Park. It was a gorgeous late November day, with the temperature in the high 50s, and Central Park provided many memorable scenes that were just waiting for me and my camera.  Here are just a few of them:

We reluctantly left Central Park, but the next destination was a good one, at least for me—Knitty City, located on the Upper West Side. I've heard about Knitty City on one of my favorite knitting podcasts, Knit, Knit Cafe, and it sounded like a very nice yarn store. It turns out that it was! The place was hopping, but the staff that we encountered were all pleasant and helpful, and the place was crammed with yarn. I ended up purchasing this: 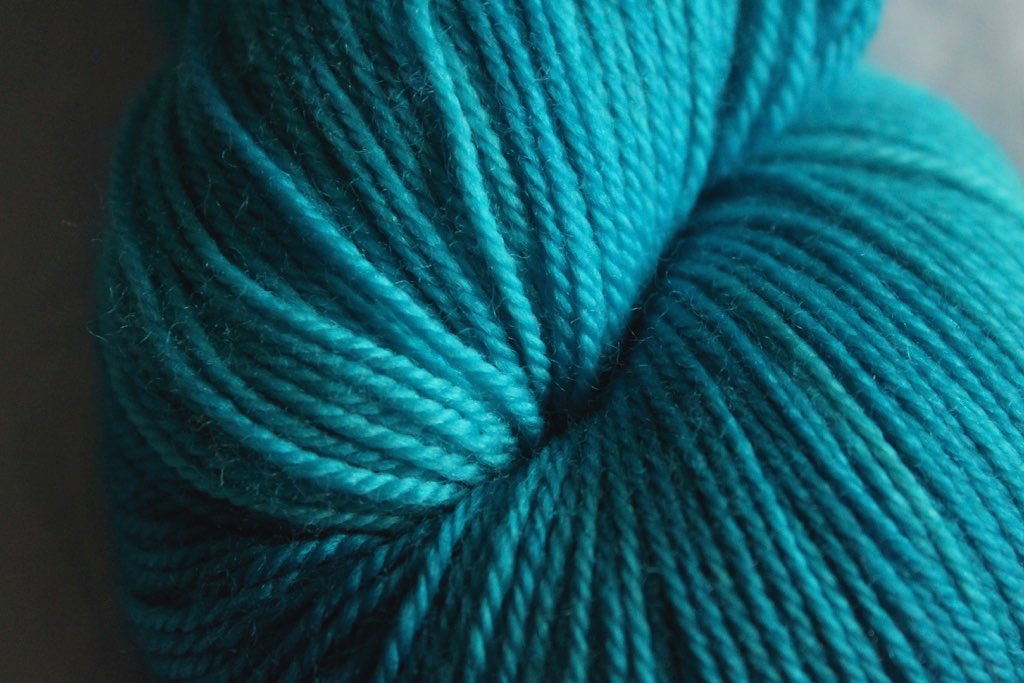 It's Sweet Georgia Tough Love Sock, in the colorway Saltwater. Funny—I had to go all the way to New York City to purchase a yarn that was hand-dyed 140 miles away from me, in Vancouver, BC. Oddly enough, I've never seen this yarn in any yarn store that I've been in on the West Coast.

From Knitty City, we headed to the subway, which we took to the East Village. We had lunch and dessert and met up with the rest of the family for a delightful performance of Stomp. All in all, a wonderful day. I really do love New York!