Walks, Hikes and Wanders #16: The Other Side of the Mountain

On July 10, the day that had been designated for our weekly hike, there was still a lot of snow in the higher mountains, and it was a cool and cloudy day, so a hike in the foothills seemed appropriate. Mr. D and I decided to go back to Squak Mountain, but this time, we wanted to hike on the north side of the mountain. We checked the map at the trailhead to determine our route, and then headed up the Bullitt Fireplace Trail.

The trail climbed fairly steeply, but unlike last time, we didn't have to share the trail with any horses. Along the way, there were lots of bushes loaded with salmonberries at their peak of ripeness, and we ate our share.

After we had been walking for a few minutes we encountered a windfall across the trail.

A few minutes later there was another:

A bit further, the trail was blocked by two more windfalls.

We just looked at all of these impediments as an opportunity for a little agility training...

Shortly after the last downed tree, we began to climb toward the top of the mountain, and the trees were taller and the clouds and fog were closer. It was spooky, but beautiful at the same time. I guess that you don't always have to have bright blue skies and stunning vistas to enjoy the wonders of nature.

What great words to start a hike with, don't you think? This sign is at the beginning of the trail at Wallace Falls State Park. You may remember that Mr. D and I hiked part of the way to Wallace Lake last October, but we didn't hike to the falls at all that time. My friend Elizabeth was visiting us from Upstate New York, and had requested a relatively easy hike, so on July 6th, that is where we went.

It was a beautiful day, and it warmed up into the high 70s fairly early, but there was a lot of shade on the trail to keep us cool. I had some fun with the sun and shadows, as you can see.

We took the Small Falls Interpretive Loop—a favorite of mine from our last hike—and I saw some wonderful mushroom growth. We stopped for lunch, and I used a paper napkin that didn't quite match our surroundings (more on how I got that napkin in a future post). We also enjoyed the wonderful green of the tall Douglas firs in the forest.

But the main point of this hike is to get to the falls, and that we did. Aren't they beautiful?

On June 25, Mr. D and I decided to go over to Cougar Mountain and do a short (2-3 hours) hike, starting out on the Red Town Trail. We did this hike almost exactly a year earlier; it was the first of my weekly hikes last summer. But several things were different this year, starting with this scene at the trailhead:

We had a lot of rain and some fairly heavy winds in the three days before this hike, and the combination of super-saturated ground and gusty winds uprooted these alders.

The second different thing was fun: Mr. D took me on a short loop that I had never been on before, and I saw this pretty scene:

Those are salmonberries on the bush hanging over the stream, and while these particular berries were out of our reach, there were plenty more along the trail to pick and eat. Salmonberries have a wonderful  tangy flavor with just a hint of sweetness. They are also very refreshing, and loaded with vitamin C, too.

Once back on the main trail, we saw some other intriguing scenes—a wild rose in bloom, an old gnarled tree, and a family of mushrooms.

As the sun came out and the temperature rose, and as we climbed higher on the trail, we began to notice more and more little creepy-crawly creatures alongside the trail. Here they are, in the biggest congregation that we saw on the whole hike:

Ewww, yucky! Cougar Mountain was experiencing a major caterpillar infestation, and we were in the midst of it. As we headed down the trail, we kept finding them on our shoe tops, crawling up our pants legs, and one even landed in my hair. A runner who ran past asked us as he went by, "Can you hear those caterpillars chewing?" And, yes, indeed we could.

Walks, Hikes and Wanders #13: Little Mount Si with a Friend

I am ashamed to admit that I now have four weekly hikes under my belt, with a fifth planned for tomorrow, and I have only written about one of them. Shame on me! Look for several hiking posts this week, and then I'll get back to talking about my knitting. At least you will have lots of posts to look forward to!

On June 21, we did our annual hike up little Mount Si, one of my favorite short hikes. My friend Susan was visiting us for two days as part of her Washington and Oregon trip. Susan is an enthusiastic and experienced hiker, so Little Mount Si was a natural.

We started up the trail, passing by the familiar trail sign: 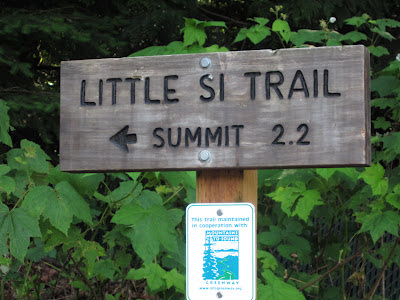 The view of the valley partway up was beautiful on this sunny and warm day.

We decided to take a detour and hike the Boulder Garden Loop, where there are definitely some BIG boulders! 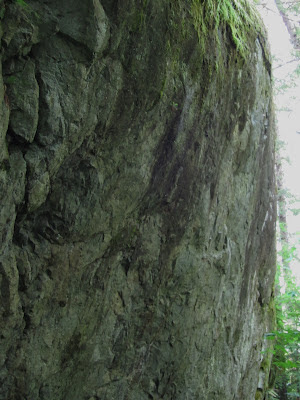 Our one miscalculation was doing the Boulder Garden on the way up. Dave and I usually do this on our way down, and when we do, it starts with a short but quite steep uphill. It was a lot harder to do that steep section going downhill, but we all handled it.

Lunch was, as always, at the top of the mountain, where we could enjoy the views of the Snoqualmie Valley and (big) Mount Si, which I hope to climb for the first time at the end of the summer. 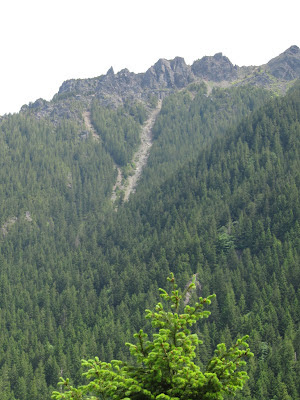 All in all, it was a wonderful day, made even more special having my friend Susan to share it with. 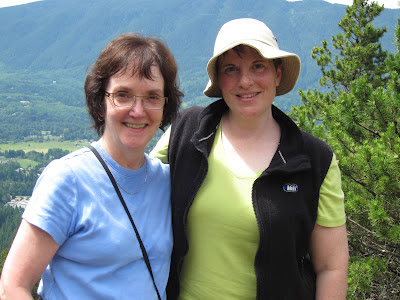