Photo of the Week: Knitterly Love

139/365: Knitterly Love, a photo by jchants on Flickr.
Last Sunday, my three knitting friends and I were in Bellingham on the annual Puget Sound Local Yarn Store Tour, and I spotted this wonderful example of yarn bombing in front of Northwest Handspun.
Posted by Julie at 5:09 PM No comments:

Weekly Hike #2: Working My Way Toward the Top

You have seen the top of Mount Si in a recent post, but you are probably aware of the fact that I have yet to hike to the top. If all goes well, this will be the year that I do it, probably along about September. To get myself ready for that hike (and also for another adventure which you will hear about in a future post), Mr. D and I are going to hike some harder and longer trails through the course of the summer.

On Friday, May 10th, a beautiful sunny day, we decided to hike the Talus Loop on the lower slope of Mount Si. We hiked this trail back in 2011, but this time, we did it a bit differently. From the Mount Si trailhead, it is 1.7 miles to the start of the 1.3 mile Talus Loop. Last time, we started the Talus Loop trail at this point. If you hike further on the Mount Si trail about another third of a mile, you get to the other end of the Talus Loop, and if you go about another tenth of a mile, you get to Snag Flats. This is the route we took. The Mount Si trail is steep the whole way up, so by going the extra distance you get an extra workout. Even near the start of the trail, you can see that it s going to become steep:

It took us about an hour to get to Snag Flats. In 1910, there was a massive forest fire that was racing down the mountain and the terrain of the land at Snag Flats stopped the fire. Many of the trees in this area were damaged by the fire, and over the years they fell and became what are called snags. Some of the trees survived the fire and are still standing and growing today, like this old growth Douglas Fir.

This beautiful old tree still had the marks of the fire that happened more than 100 years ago. 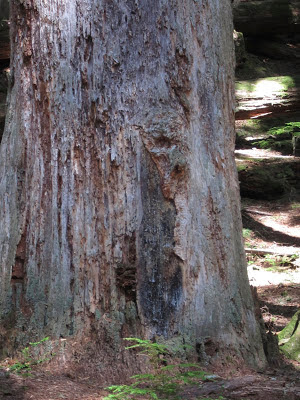 After eating a snack and drinking some water at Snag Flats, we headed back down to the upper end of the Talus Loop, and hiked to the sunny spot that offers some great views of Mount Rainier, the Cascades and Interstate 90 winding through the Snoqualmie Valley.

From this spot, it was almost all downhill. We passed through the quiet forest and over this pretty snow-fed stream.

So, while I haven't yet climbed Mount Si to the top, I did get halfway up! I hope to hike that much, and add the other half, sometime later this year. I will be sure to tell you about that adventure as soon as it happens.
Posted by Julie at 11:03 AM No comments:

128/365: Happy Shining Faces, a photo by jchants on Flickr.
Seen at the local garden store.
Posted by Julie at 3:33 PM No comments:

Email ThisBlogThis!Share to TwitterShare to FacebookShare to Pinterest
Labels: photo of the week, Project 365, spring

Photo of the Week: Knitting in the Shade

I started writing this post at the end of April—a very wet month—with the idea of talking about hiking in the spring, when the trails in the Cascades are snow covered and impassible, and the only possible hikes are in the lowlands around Seattle. Then, May Day arrived, the sun came out, and it hasn't just been warm and spring-like, it's been hot (80s!) and more like summer since then. The warm-up jumpstarted my hiking, and I have already done my first weekly hike, which I'll tell you about shortly.

First, I want to talk about those spring lowland hikes, and share photos from two recent ones. There are problems with hiking in the spring, including mud, rain, and as I mentioned above, being limited to the lowlands and foothills because there is SO much snow in the higher elevations. There are many wonderful trails that are well below the snow line, however, and while they might be muddy at times, they are accessible all year long.

One of these hikes is literally only 15 minutes from home, in Kenmore, the next town over. On one of the few Saturdays in April that it didn't rain, Mr. D. and I drove over to St. Edward State Park and hiked one of the trails that goes down to Lake Washington and then up through a pretty wooded ravine. As you can tell from the photo below, that wonderful misty spring green was just starting to appear.

The following Saturday, with rain in the forecast for the afternoon, we left the house around eight and drove to Tiger Mountain. In the past, we have hiked to Poo-Poo Point and to the West Tiger Mountain Summit. This time, we explored the trails on the Tradition Plateau, which are relatively flat and dotted with wetlands and little lakes. Here is one of the wetlands along the aptly-named Wetlands Trail.

I thought that we would be limited to short hikes like this into May at least, and maybe even into June, but then the sun came out on May Day! Mr. D and I made a snap decision to do a real hike, and we were out of the house by eight o'clock and arrived at the parking lot at the Little Mount Si trailhead a little over an hour later. It was a beautiful day for the first weekly hike of the season. Once we got on the trail, I had to stop and take a photo looking across the Snoqualmie Valley. I love seeing all of the different shades of green!

There was even more wonderful green looking down the trail and looking up into the trees:

It felt great to bask in the sun on top of Little Mount Si, but it still looked mighty snowy on the summit of "Big" Mount Si above us. (Mr. D hiked Mount Si four days later, and said a lot of that snow had melted by then.)

I've declared the May Day Little Mount Si hike to be the first of my weekly hikes for 2013. I am going to extend the weekly hike season until the end of September, and my goal is 20 hikes this year. Due to the longer season, I may not hike every week, but I am pretty sure I will meet my 20 hike goal. Another goal this year is to actually walk on the summit of Mount Si, rather than to view it from below. Can I do it? I think I can, I think I can...
Posted by Julie at 11:09 AM No comments:

Photo of the Week: Emerging from the Spray

114/365: Emerging from the Spray, a photo by jchants on Flickr.
Father and Son, a sculpture by Louise Bourgeois, at the Olympic Sculpture Park, Seattle.
Posted by Julie at 11:30 AM No comments: