81/365: Old Man Winter Returns, a photo by jchants on Flickr.
On the third day of spring, and after a winter with almost no snow, we had an intense two-hour snow squall pass through. Thankfully, by noon it was all over and the snow was almost all gone.
Posted by Julie at 3:41 PM No comments:

Email ThisBlogThis!Share to TwitterShare to FacebookShare to Pinterest
Labels: photo of the week, snow, spring

Photo of the Week: A Green Mystery

76/365: A Green Mystery, a photo by jchants on Flickr.
I'm participating in designer Corrina Ferguson's Evadine Mystery KAL.This is just a tiny part of the shawl, near the end of clue #1. I'm knitting this in Hazel Knits Artisan Sock in one of my favorite colorways, Shannypants. Don't you think this is an amazing green?
Posted by Julie at 6:36 AM 4 comments:

You have already heard about all the fun I had at Stitches West, but the Santa Clara Convention Center wasn't the only destination on my trip. Mr. D and I spent a long weekend with my sister-in-law and her family in one of my very favorite places: Santa Cruz, California. Come along with me on a quick tour of this fun and funky town.

And a merry-go-round of fun!

Photo of the Week: Purple and Orange

70/365: Purple and Orange, a photo by jchants on Flickr.
Crocuses in perfect bloom. Spring is almost here!
Posted by Julie at 5:17 PM 1 comment:

Email ThisBlogThis!Share to TwitterShare to FacebookShare to Pinterest
Labels: my neighborhood, photo of the week, Project 365, spring

Photo of the Week: Curlicues and Catkins

62/365: Curlicues and Catkins, a photo by jchants on Flickr.
On a Harry Lauder's Walking Stick. (Yes, that really is the common name of the tree.)
Posted by Julie at 2:12 PM No comments:

Email ThisBlogThis!Share to TwitterShare to FacebookShare to Pinterest
Labels: my neighborhood, photo of the week, Project 365

A Little Bit Madrona and a Lot of Stitches West

Well, as you can see from the title of this post, I went to Stitches West for the first time this year. And I had a blast! But first, I want to tell you about Madrona.

Madrona was a bit disappointing this year. No, not the classes or the market or the other fun happenings associated with the event. What was disappointing was that my knitting friends that I usually go with and I all had classes on different days, so it ended up that we all went separately and didn't hang out and knit and shop together. Despite missing that, I did have two fantastic classes from my favorite teacher, Clara Parkes. I also had lunch with my friend Sherrill and dinner with my friend Sarah. Sarah and I attended the Thursday night Teacher Talent Show, which I can't tell you about. (What happens at Madrona, stays at Madrona.) I made two very brief forays into the market (less than 30 minutes total) and bought exactly one circular needle—an Addi Turbo US size 8—and this:

You probably knew that it would have to be Hazel Knits yarn, but I bet you didn't think it would be black! I have already cast this yarn on for a project tied to one of this year's goals, but you will have to wait until I'm further along to see what that project is.

Less than a week after I got home from Madrona, Mr. D and I were flying down to San Jose, California. My sister-in-law picked us up at the airport, and dropped me off at my hotel in Santa Clara, so that I could attend Stitches West all day Thursday (the opening day) and a little bit on Friday, before being picked up to join Mr. D for a long weekend with his sister and family in Santa Cruz. (I'll tell you more about Santa Cruz in an upcoming post.)

My Stitches experience started within an hour of arriving at my hotel. Registration was open for three hours on Wednesday afternoon, so I headed across the street to the convention center to pick up my registration materials. Before I even got into the building, I ran into Jasmine and Gigi, the Knitmore Girls. I had met them previously at both Sock Summit in 2009 and the Black Sheep Gathering in 2010, so it was nice to say hello and chat for a couple minutes. Then, after I went inside, I ran into my Ravelry and She-Knits friend, Kathy (AKA mountainpurl), and ended up hanging out and having an early dinner with her and her friends. We had a great time and laughed a lot! After dinner, Kathy and I were joined by Debra (Javanut on Ravelry). I was really happy to meet her in person for the first time, after having known her only through the She-Knits group on Ravelry.

Thursday was my big day at Stitches. Way back in September, when I knew for sure that I would be attending, my She-Knits friend, Barb (knittybarb of the 2 Knit Lit Chicks podcast) and I made a plan to get together to meet in person and attend the opening Spotlight (keynote) and the luncheon. Barb's daughter and co-host, Tracie, also joined us. It was so much fun to meet them both, and the Spotlight talk by Laura Bryant was fascinating! The luncheon was like speed dating—Stitches teachers moved from table to table and had five minutes to talk about their classes, designs and interests. If I get to go back to Stitches sometime in the future, those little five-minute talks have given me some ideas about classes I might want to take.

After the luncheon, it was time for my class, the Sock Knitter's Seminar taught by Carol Sulcoski. Her book, Knitting Socks With Handpainted Yarn, is one of my favorites, so I was excited to take a class from her. I had done my homework, and learned how to do an afterthought heel (which I have never attempted before), as well as learning some tips about grafting sock toes that will make them look a lot better. Carol has a really nice sense of humor, and the class was fun as well as interesting.

I know that as you have been reading all of this you have been thinking, "When is she going to tell about the Stitches Market?" Well, that time is now. First of all, it is huge!!! I thought I had experienced a pretty big market at Sock Summit, but you could put two Sock Summit markets into the Stitches market and have room left over. Because it's so big, it's pretty overwhelming, and even on Thursday, when only registered students can attend, there were, according to a podcast I listened to, 4,000 people shopping!

One bit of advice that I had picked up from previous attendees was to head first toward the back of the market where it was less crowded. That's exactly what I did, and I made my first purchase from Romi Hill at A Verb for Keeping Warm's booth. Here it is:

Next, I went to the Cephalopod Yarns booth and bought some Bugga:

I love this rich red color, and the yarn is slated to become Amy Swenson's vest, Meadowlark, sometime later this year. I found some great red buttons, too, which will end up on a future cardigan, I think.

I also bought some beautiful Kangaroo Dyer hand-dyed BFL at the WEBS booth, and I plan to knit Kirsten Hipsky's Burning Branch Shawl with it.

My final yarn purchase didn't happen until Friday morning, but I discovered the yarn on Thursday night. Imagine going all the way to Santa Clara, California to buy yarn that is produced less than two hours away from home, in Bellingham, Washington. Here is Spincycle Yarns Dyed in the Wool. I can't wait to knit with this yarn! Isn't that just the most amazing shade of blue?

Toward the end of my time in the market, I ran into Barb and Tracie again, and they invited me to join them and some of their friends in the hotel bar for dinner. There was lots of great conversation and I had so much fun! Here is a photo of knittybarb and me, toasting knitters, knitting and Stitches West. Cheers! 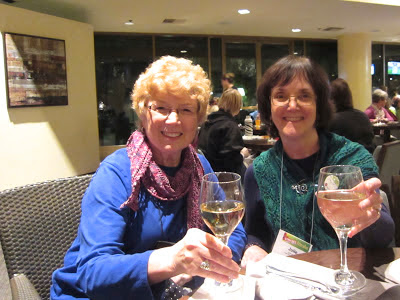 Photo of the Week: What Knitters Talk About

52/365: What Knitters Talk About, a photo by jchants on Flickr.
Beautiful finishing details on an exquisite cardigan. Seen in the hotel bar, after the first day of Stitches West.
Posted by Julie at 8:50 PM 1 comment: