Photo of the Week: Apple Season

230: Apple Season, a photo by jchants on Flickr.
Fall is definitely on it's way, because the apples are starting to arrive at my local farmer's market.
Posted by Julie at 3:14 PM 2 comments:

Email ThisBlogThis!Share to TwitterShare to FacebookShare to Pinterest
Labels: farmer's markets, photo of the week

Hiking on pavement? Really? Well, yes, really. And there is a good reason for it, too. Back in March, Mr. D and I signed up to walk the Tacoma Narrows half-marathon on August 3. We planned to walk it along with my friends, sisters Sarah and Martha, and their husbands, Dave and Tom.

While I'm a pretty good hiker and walker, I have only walked distances longer than seven miles a handful of times. Ten years ago, when Mr. D and I were in New Zealand, we walked over 20 miles hiking the Kepler Track (including getting to and from the trail from the town we where we were staying). Two years ago, Mr. D and I hiked to Surprise Lake, which was about nine miles, roundtrip. I've probably also walked in the eight to ten mile range a few times when I've been traveling in Europe.

Anyway, to prepare for the half-marathon, I extended the regular neighborhood walks that I do several times a week to at least five miles, and sometimes farther. I met up with Martha, who doesn't live too far from me, to do some walks in her neighborhood, including the torturously steep hill that she lives on—and I thought the hills in my neighborhood were steep!

On July 17, about two-and-a-half weeks before the half-marathon, Mr D and I decided to walk the Burke-Gilmam Trail from the access point near our town center, all the way down to University Village, a distance of slightly more than eight miles. The point of this walk was to get a sense of our time and pace, so for much of the walk we were going at a pretty good clip, and it showed in our final time: two hours and twenty minutes. I was focused on keeping up my pace, but I did stop to take a couple photos along the way. 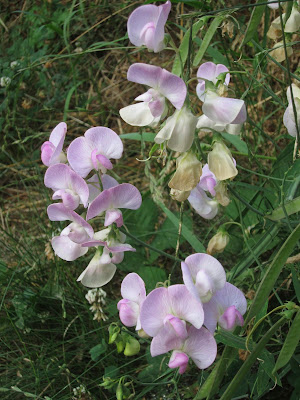 On my walk on the Burke I proved to myself that I could walk eight miles in pretty good time, but what about 13.1 miles?

The day of the half-marathon was blessedly cloudy/foggy and cool, and Dave and I woke up well ahead of the alarm, at 3:45 a.m. We were on the road about an hour later, and were in downtown Tacoma before six. We met up with Sarah, Dave, Martha and Tom and took the shuttle to the start of the race, which was at the airport near the Tacoma Narrows Bridge. While we were waiting for the race to start, Mr. D and I hung out with a new friend: 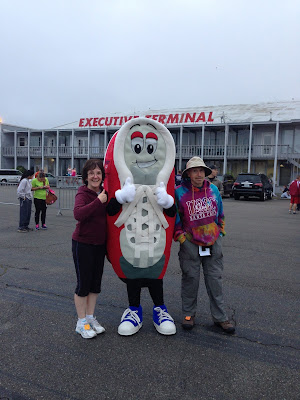 At 7:30 we were off! Sarah and I spent the early part of the race walking together. Then I walked with Mr. D and Sarah's husband for a while (Sarah was walking with Martha and Tom, who were a few minutes behind us). At mile 9, I got a sudden burst of energy and took off. I was spurred on knowing that all that was left was the distance of my usual neighborhood walk. I walked by myself until there was about a mile-and-a-half left, and then Sarah caught up with me and we did the rest of the walk and crossed the finish line together. Our time: three hours, twenty-nine minutes and thirty-nine seconds!

I don't have any photos of the actual race, but I do have one of all the finishers in our little group: left to right it's Dave, Sarah, Martha, Tom, me and Mr. D. 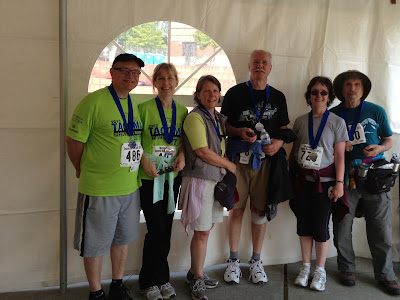 I also have photographic proof that I finished.

Photo of the Week: Hanging' Out

223/365: Hanging' Out, a photo by jchants on Flickr.
My recently-completed Mother Bear, chilling with her friends.

Do you know about the Mother Bear Project? The Mother Bear Project is "a non-profit organization dedicated to providing comfort and hope to children affected by HIV/AIDS in emerging nations by giving the gift of a hand-knit or crocheted bear." For more information, visit their website.
Posted by Julie at 3:40 PM 2 comments:

Photo of the Week: Forgotten Treasures

213/365: Forgotten Treasures, a photo by jchants on Flickr.
These colorful stones were purchased many moons ago on a trip to Olympic National Park. I found them recently in a desk drawer.
Posted by Julie at 7:47 PM No comments:

Email ThisBlogThis!Share to TwitterShare to FacebookShare to Pinterest
Labels: photo of the week, Project 365

Knitting in the Garden

This is a glimpse of my most recent finished object, A Piper in the Garden, the Piper's Journey shawl, designed by Paula Emons-Fuessle. Doesn't it look beautiful next to the green leaves and pink blossoms of the hydrangea in my garden?

This particular project really seemed to have many garden-ish overtones. The yarn is madelinetosh Tosh Sport, in the colorway Heuchera. It just so happens that I love heucheras, and I have several in my garden. They are a wonderful foliage plant, and come in a range of colors, everything from green to black, with reds, oranges, browns, purples and many other colors in between. It just so happens that I have a purple heuchera in my garden, so not long after I cast on, I photographed the shawl next to/on top of that heuchera.

A pretty close match, don't you think? The color genius behind madelinetosh yarns must have had this Heuchera 'Spellbound' in mind when she created this colorway.

Once the shawl was finished, it was too big to be photographed next to the heuchera, so I moved down the walk to the garden gate and photographed it there. You can see my hanging fuchsia baskets above it, and a bit of two hardy fuchsias in the garden behind the gate.

I photographed the shawl next to the hydrangea, as you have seen above, and also here:

Finally, I draped it over the cotoneaster that grows alongside the patio. You can see the other side of the gate in the background. I think my garden and this shawl are a match made in heaven, don't you?

Photo of the Week: Hand-dyed for Me

204/365: Hand-dyed for Me, a photo by jchants on Flickr.
I'm behind on my photos of the week—but only a little behind—because this was last week's photo. Isn't this the most luscious yarn? I attended a yarn-tasting event at one of the local yarn stores, and this is the yarn I "tasted." I love the color, and it's a dream to knit with, too. I special ordered two skeins on the spot, and the day I picked them up, I commemorated the event with this photo. Sometime in the near future, this yarn is going to become Rose Beck's Sugar is Sweet. It will be sweet, indeed, knit in this yarn!
Posted by Julie at 2:10 PM No comments: