Last month, I knit this little dishcloth to go with two blue and white dish towels that I bought in July at the wonderful Baker's Store at the King Arthur Flour headquarters in Norwich, Vermont. I bought the dishtowels as a little extra birthday gift for my longtime friend (since third grade!), Stephanie.

After I entered my project into Ravelry, I happened to look at the upper righthand corner of my notebook, and I noticed that I had 200 projects! And this little dishcloth was project 200. Those 200 projects represent my progress as a knitter. In February 2008, when I joined Ravelry, I was only a little over a month into my career as a serious knitter. Prior to 2008, almost the only items that I knit were dishcloths, and I only ever knit them in occasional spurts, followed by long periods of time when I didn't knit at all.

My Project 200 dishcloth is certainly representative of where I started back in 2008, and if you look at projects 198 and 199, you can see some of the directions I have traveled in the years since.

Project 198, two Click for Babies hats, is representative of some of the charity knitting I've done. Other charity projects have been chemo hats for Halos of Hope, scarves and hats for local homeless shelters and my favorite, bears for the Mother Bear Project. 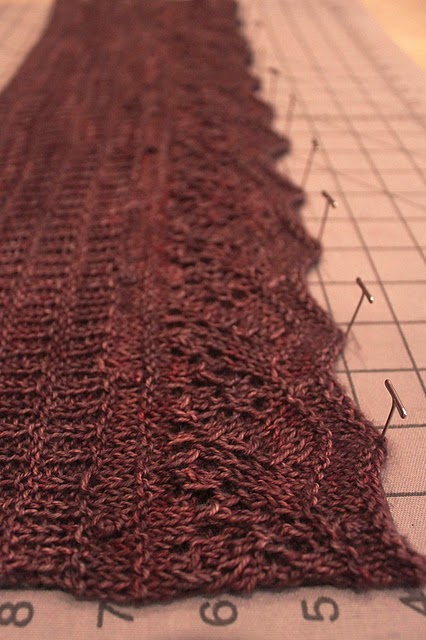 Project 199, Brown Biscuit, is Bonnie Sennott's beautifully textured Biscuit cowl, and provides a hint of some of the many new skills I have acquired over the years. There are textured stitches, lace and even some small bobbles in this piece. In addition, this project represents some color experimentation for me. I have never been much of a fan of brown, but this brown—Hazel Knits Entice in the colorway Smudge—has little flecks of red throughout, and I love it! Look for Smudge to pop up in a larger project sometime in the future.