I have been meaning to get the new hiking season started on the blog for the last three weeks, and now I am finally doing it. In between a lot of rain—yesterday we set a new record for rainfall for February through July (in May)—Mr D and I have gone on three hikes.

The first of these hikes happened on April 30, a gorgeous, sunny day. We had a lot of things going on at home that day, so we opted for a short hike (about 5 miles round trip) up to Rattlesnake Ledge in the morning. It was a Wednesday, so we thought that it wouldn't be too crowded, and it wasn't, but we still saw a lot of people on the way up and down and at the top. I don't think that hike is ever completely solitary...

Because the hike was planned to be short, I took very few photographs, but it wouldn't be a hike to the Ledge without a shot of the spectacular view across the Snoqualmie Valley to Mount Si: 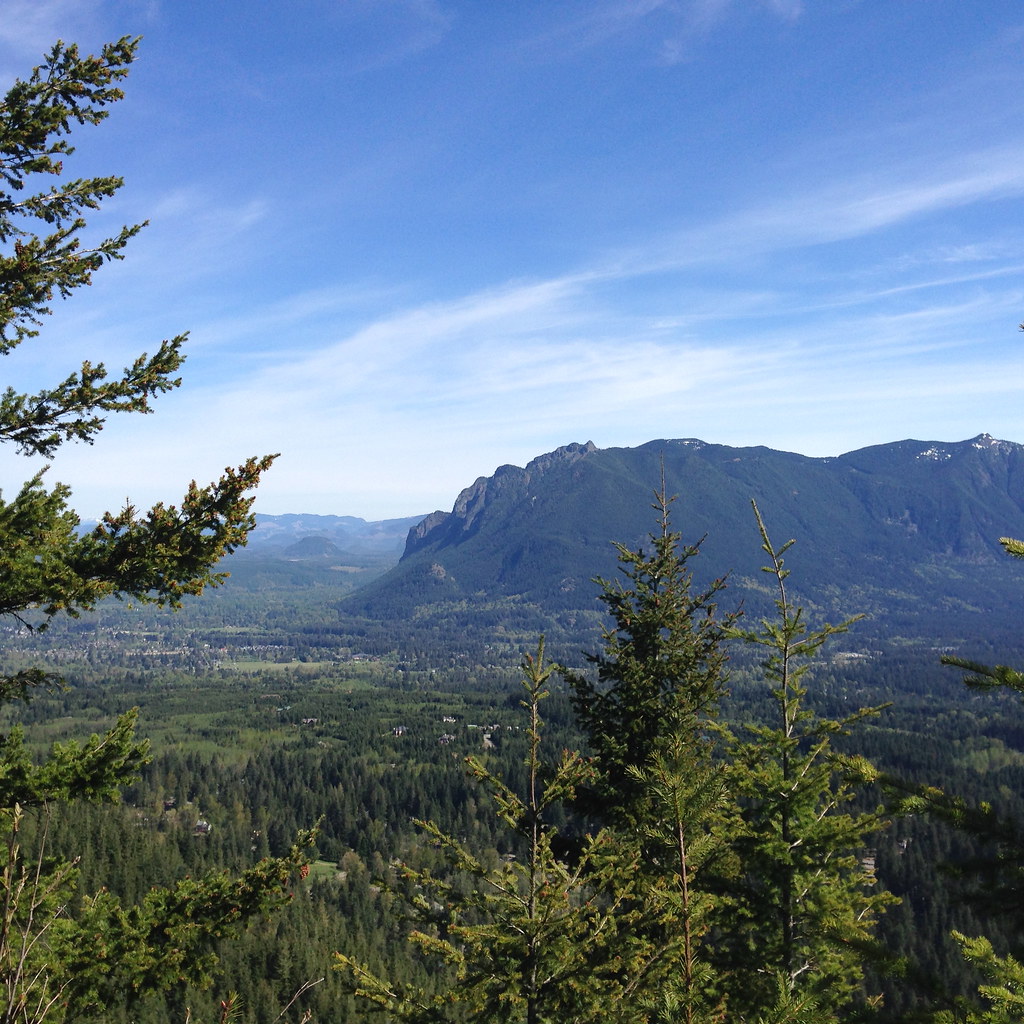 The only other photo I took happened at the end of the hike, on the shore of beautiful Rattlesnake Lake. What a vista! 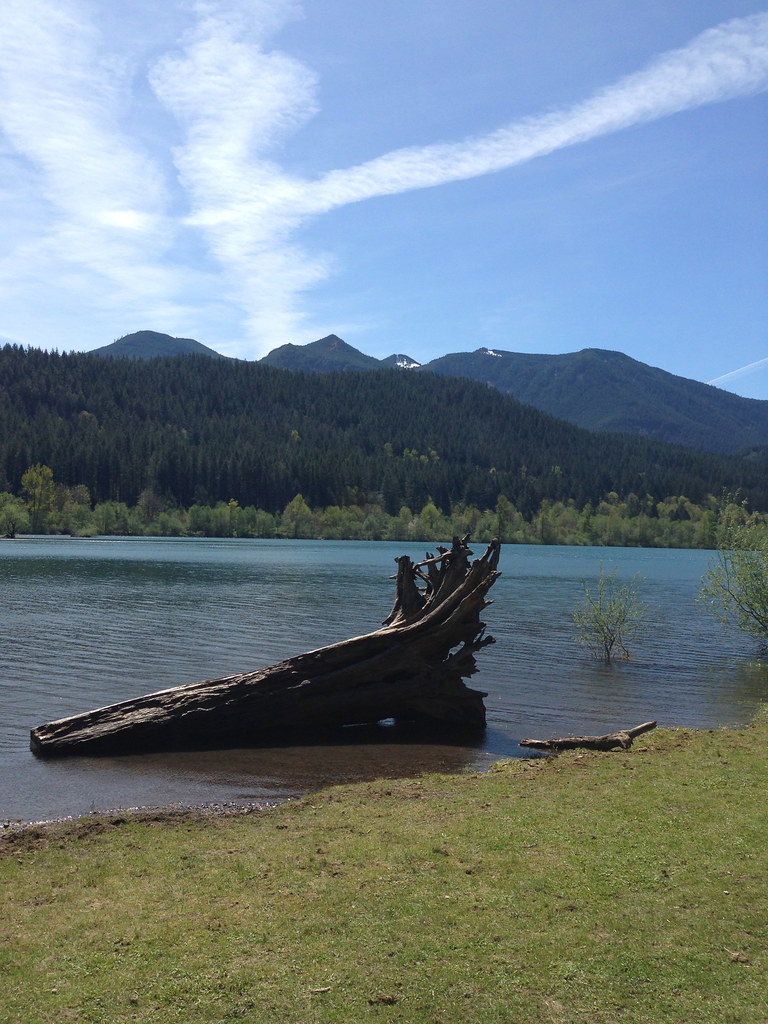 I know this isn't the most exciting hiking post, but there are more hikes on the horizon, so stay tuned!

A Fortnight of Finishing

Do you know the word "fortnight"? The dictionary defines it "a period of two weeks." It may be due my fondness for English novels, where this word is often seen, but I am always looking for a good excuse to use it.

Happily for me, the last fortnight has been full of finished objects: a total of 5 major projects and one minor project have made the last two weeks of my knitting very satisfying. Are you ready for the reveal? Here we go!

On April 20, after months and months, I finally finished my I'm in Focus, Veera Välimäki's design, Shift of Focus. I cast it on last September, so it took over 7 months to complete. It was A LOT of garter stitch! That being said, I really like the finished cardigan, and I love, love, love the yarn, Hazel Knits DK Lively in the Queen of the Night colorway. This was the project that got a bit of a sneak peek in the last post, and here is the finished photo:

On April 22, I finished a project that had been on the needles since early February, a sock project that I called That Crafty Honey Badger! The pattern is Honey Badger by Irishgirlieknits, and the yarn is Socks That Rock Lightweight in the Paula Mae—A Night at the Show colorway.  I won the yarn in 2012 in a KAL drawing in the Irishgirlieknits Ravelry group, so I knew I had to knit one of her patterns with the yarn. The pattern was easy but interesting, and I love how the socks turned out. I will definitely knit these socks again.

The following day, April 24, I finished Sending a Little Love With Castanets, Melissa J. Goodale's shawl pattern, Castanets. I knit this for the March-April Hazel Knits knit along. The idea behind the KAL was to find a pattern that was at least six months old and that had less than 25 projects. Extra points were assigned for stash yarn more than a year old (definitely!) and a colorway (Sapphire) not part of the Hazel Knits lineup. My project was number 17 for the pattern, but I notice that there are now 27, so maybe it is getting some more love. It certainly should, because it is an interesting pattern and such a pretty shawl! Mel has some variations to the pattern (garter stitch instead of stockinette, a larger size and a two-color version) that I may try in the future. I will definitely knit this pattern again sometime!

On May 1, I finished my car project, which I called The Most Boring Car Project Ever. No, it wasn't the pattern, Ann Budd's 8 Stitches Per Inch Socks (my go-to plain vanilla pattern), that was boring; it was the yarn. For the past several months, I have been knitting my car project socks in self-striping and self-patterning yarn (see my knitting goals for 2014 for more on this), and I had thrown this yarn into the hopper for that effort. Mistake! The yarn was definitely not self-patterning and so boring, although the finished socks look nice. Here they are:

On May 2, I finished the last of the fortnight's projects, Dishcloth Thank You Gift, two cotton dishcloths for my friends, Jill and Dick. We had dinner with them a couple weeks ago, and Jill gave me four big balls of Lion Brand Cotton dishcloth yarn that a friend who had stayed with them for a few months left behind when she moved out. Dick mentioned that they hadn't had any hand knit dishcloths since Jill's aunt died a few years ago, and I thought what better thing to send along with a thank you note than two dishcloths! I knit one using the Grandmother's Favorite pattern, and the other using Variation on a Theme, which is a pattern based on Grandmother's Favorite. I'm not a grandmother, but these two patterns are definitely my dishcloth favorites! Here they are, Grandmother's Favorite on the left and Variation on a Theme on the right.

The fortnight is now over, and I don't expect that there will be any finished objects for a while, but keep an eye on the blog for some in-progress knitting coming up soon.

In the meantime, happy knitting!