It really is a Million Dollar View! After a week of nothing but fog, Mr. D took me up to Cougar Mountain for a hike yesterday, and this is what we saw:

That's Mount Baker on the horizon, and miles of fog in the lowlands. In addition to the fantastic view, we also enjoyed temperatures in the low 60s, a big improvement from the high 40s inside that layer of fog.

I haven't forgotten hike number 18; it's coming up next. There is also a nice long knitting post coming soon, too.
Posted by Julie at 12:24 PM No comments:

I know that you are looking at the title of this post and saying, "But what about hike number 18?" I will get to that hike in a day or two, but I wanted to post about these three hikes together because they are similar in many ways.

On Saturday, September 7th, Mr. D and I decided to hike again on the Rattlesnake Mountain Trail, and see if we could explore a bit farther than we did on our hike earlier this year. Unfortunately, the weather looked like this:

Our plan had been to hike along the top of the mountain, stop in a new spot with a view for lunch, and then hike back down. But, in addition to mist and fog that we encountered in the early part of the hike, it began to rain hard when we were just past Rattlesnake Ledge. We decided that wimping out was our best option, so we turned around and hiked back down. Ironically, it was not raining when we got back to our car, and the sun came out shortly before we got home. While the hike was shorter than planned and there were no sweeping views, we did enjoy the solitude of the dark forest, and we saw some "little views".

A week later, we decided to hike at Cougar Mountain. I really wanted to go back to see the Million Dollar View. This time, we took a different route to get to the viewpoint, but on this day there was no view, just fog all around us. (Click the link above to see the view on a better day.)

We had two other hikes planned in September, one of which was to be my first expedition to the top of Mount Si, but both were rained out. A new rainfall record for the date was set on September 28th, the day we would have been hiking on Mount Si. I was very glad we stayed home! Because of the rain-outs I'm extending my "Weekly Hike Season" until at least the end of October, and maybe even longer, weather permitting.

On October 16th, Mr. D and I decided to hike the western end of the ten-mile long Rattlesnake Mountain Trail. We learned about this section of the trail from a woman we encountered on our rainy hike at the other end of the trail. She told us that it was very scenic and less heavily traveled than the east end of the trail.

Once again, we started our hike in the fog:

As we started to climb, it became brighter and brighter, and finally the sun broke through the fog.

When we reached Stan's Overlook all we saw was fog below us, but we did have a great view of the mountains. 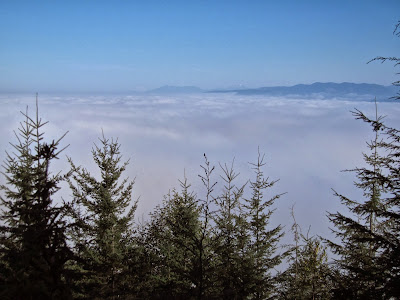 After eating a snack, we headed back down into the fog, which provided us with another great view:

Sometimes less than perfect weather can still be your friend!
Posted by Julie at 12:30 PM No comments:

Weekly Hike #15: A Hike with Friends

It was a week of hiking, first, the three hikes at Mount Rainier, then on Saturday, August 31, a hike with our friends Sarah and Dave, and Dave's son, Justin. We decided to do the approximately seven-mile round trip hike to the beautiful Olallie Lake. (You may remember that I blogged about this hike in 2011.)

It was a gorgeous day for a hike, as you can see.

The sunlight cast beautiful shadows along the trail.

At one point, the trail was made of wood. These walkways are called puncheons.

Sarah is one of my knitting friends, and not only did we talk knitting the whole way up to the lake, but look what we did once we got there... 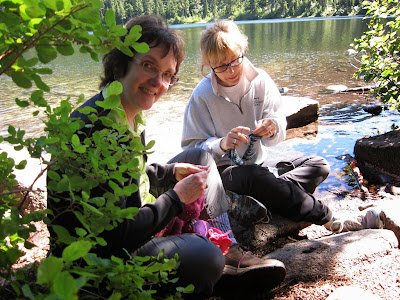 We didn't just knit, we also enjoyed the view of the lake and posed for a photo. 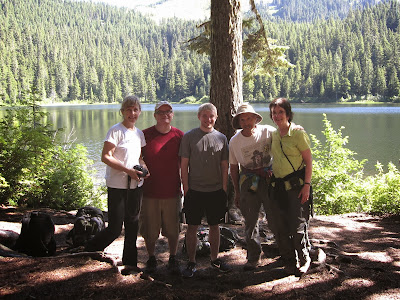 All in all, it was one of the most fun hikes we have done this year. We scheduled another hike (Mount Si) for late September, but got rained out. Mount Si has been rescheduled, so watch for a post toward the end of October about that hike.
Posted by Julie at 10:53 AM 1 comment:

Catching Up with Photos of the Week

Wow, it's been two weeks since my last post! And in addition to that, I am even farther behind on posting my photos of the week. Today you are in luck, though, because I am going to share several photos of the week all at once. Enjoy! I'll be back with another post, catching you up on my hiking, in a day or two.

The Fremont Troll, very appropriate for Friday the 13th!

My grandfather's dice cup, photographed on September 18th, which was his birthday.

It's the season of the spider; seen on a very foggy morning.

An Anna's hummingbird, seeking refuge from the downpour inside a rhododendron in my garden.

Infinite pumpkins. Halloween is just around the corner!