All good things must come to an end, so on Sunday, August 26, we set out on our last hike in Switzerland. Mr. D and I were joined by one of the sisters-in-law and the niece. We started out from Pontresina this time, heading toward Muottas da Schlarigna, a mountain high above the village. Before we even left Pontresina, we saw a typical Swiss morning scene—the airing of the featherbed. 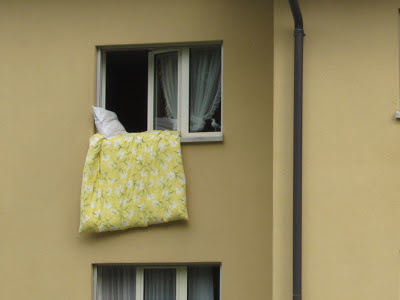 Not long after seeing this, we left the village behind and started to climb, and climb and CLIMB. After about two hours, and right about lunchtime, we reached the highest point of our hike. The views were fantastic!

There were cairns everywhere, and you know how I love cairns. I even added my contribution to one of them.

After enjoying the beautiful views and eating our lunch, we set out again. Our original destination was a small lake that was at the end of a trail that branched off from the main trail, but the going got a lot slower from this point on. Due to the heavy rains of the last few nights, there were several little streams that suddenly weren't so little anymore, not to mention mud and many slippery spots. We did walk through a beautiful forest, and saw trees like this one, clinging to the mountainside.

When we finally reached the turnoff to the lake, Mr. D and I decided to stay on the main trail and head down to Bad St. Moritz, and from there walk on to St. Moritz to catch the bus back to Pontresina. The sister-in-law and the niece continued on to the lake, and they didn't get back to Pontresina for almost another three hours (but they said the lake was beautiful). Even with skipping the lake, we hiked for another hour, and after reaching the end of the trail, it took another half-hour to get to St. Moritz. Though I was tired by this time, there were still some beautiful views to enjoy in Bad St. Moritz, including this one:

It was the perfect end to my hiking adventures in Switzerland.

This may be the last of my hiking adventures, but I had many more adventures on the trip. I will share some of my favorites with you in the coming months.
Posted by Julie at 2:55 PM